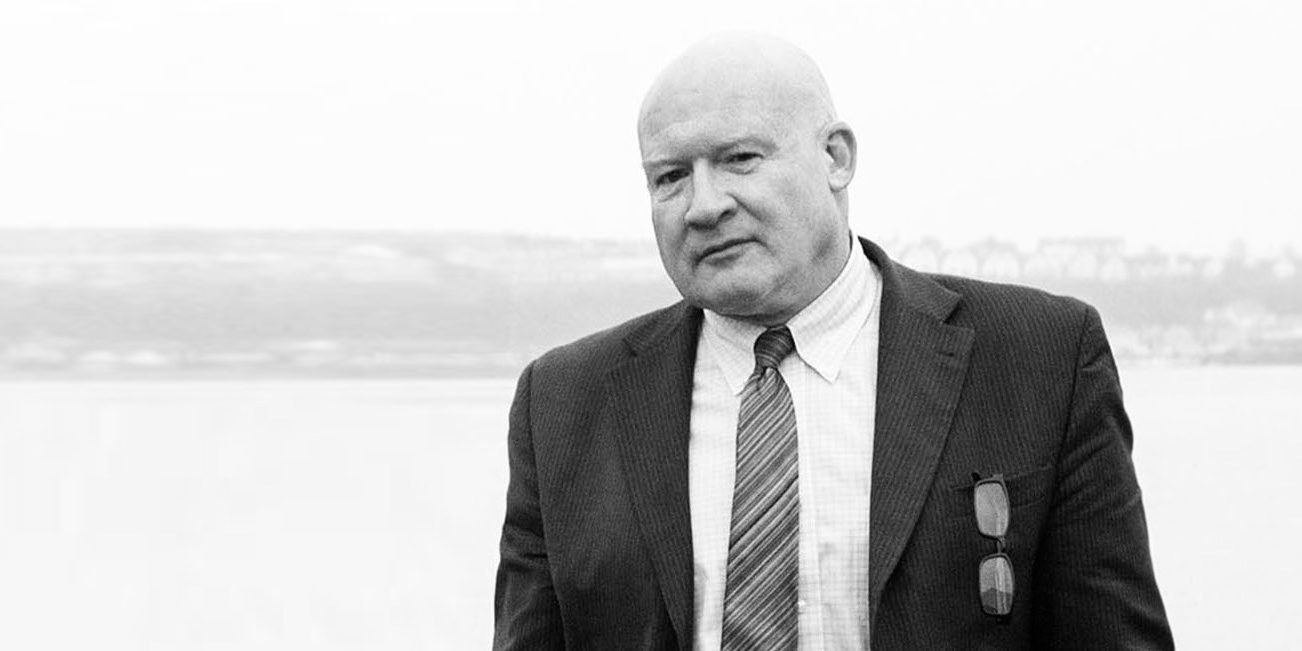 Ethan Gutmann began the official U.K. promotion of his new book ‘The Slaughter: Mass Killings, Organ Harvesting, and China’s Secret Solution to Its Dissident Problem’ in the Word Power Books in Edinburgh on Thursday, Nov. 27.

The book is a powerful record of the emergence of new methods of repression, torture, and execution by the Chinese Communist Party seen through sustained and very personal interviews with those involved, mostly Falun Gong practitioners. Mr Gutmann is not a Falun Gong practitioner but has developed a deep passion for their plight in China.

The U.K. tour, which follows an eight-city tour of Canada, included visits to The U.K. Parliament, The Welsh Assembly, The Scottish Assembly, Glasgow, and other cities.

As well as Members of the British Assemblies and Parliament, Mr Gutmann shared his platform with Nobel Peace Prize nominees David Kilgour and David Martas, authors of ‘Bloody Harvest: the killing of Falun Gong for their organs.’ Audiences also heard direct testimony from Falun Gong practitioners with personal experience of the Chinese torture system.

He spoke to Rosemary Byfield in Edinburgh, giving an impassioned plea to look into the contents of the book.

Question: The Kilgour-Matas report came out in 2006 and now you’ve written your new book ‘The Slaughter.’ What’s new in your book?

Ethan Gutmann: My book was almost exclusively based on field research. I interviewed people quite extensively for hours—in some cases, for days—to try to get to the bottom of these allegations. In addition, I spent a lot of time on the “Why?” Why would the Chinese state take such a wild risk? What is the conflict with Falun Gong really about? I answer that by focusing on Falun Gong, its development, and how the CCP’s crackdown coalesced around that development.

My book also goes deep into the resistance of Falun Gong in the prisons—and strays into the Changchun television hijacking, and similar incidents which had a profound effect on the trajectory of the repression. Yet in the final analysis, I try very hard to let the reader reach their own conclusions. Kilgour and Matas are very well established figures. I am just a writer. So the book is meant to be read and judged “on its own steam” if you like. And people should make their own assessment of the evidence.

Question: What is the evidence you have?

Ethan Gutmann: Have a heart—I can’t summarize the whole book here! Look, I came up with many witnesses who had received highly unusual physical examinations—in labour camp, in prison, in detention or in black jails—examinations clearly aimed at assessing their organs or tissue matching. Not just in the Falun Gong community, but among the Uyghurs, the Tibetans, even the house Christians.

Think about it: Uyghurs and Falun Gong, they don’t really talk to each other, do they? Do the Tibetans talk to the Uyghurs? Perhaps a little. Yet what is the likelihood that witnesses from all these different groups would describe exactly the same physical examination?

But we don’t have to just rely on these accounts. There are several doctors, including one who performed live organ harvesting with his own hands. Read chapter nine: it’s about a doctor who ran into Falun Gong organs for sale before the allegation of forced organ harvesting of prisoners of conscience had even surfaced. In other cases, heart transplants that were scheduled on a certain day down to the hour, as if the Chinese authorities had a twilight-zone ability to predict a traffic accident. Of course they simply had a massive stable. Again people can judge for themselves, yet I think the evidence is fairly clear that this stable was populated with Falun Gong.

Question: What has been the reaction to your book?

Ethan Gutmann: The reviews are strong. One reviewer called it an “atom-bomb.” And recognition is starting to seep in. In Taiwan, because one of the witnesses in the book is currently running for mayor of Taipei, the reaction has been particularly profound. I expect the Chinese edition will do quite well. Within America, my book launch was held at the National Endowment for Democracy. The room was packed. In Canada, the book recently went to number one in China books on Amazon.

But I think the wider perception is this: the Kilgour-Matas report came out in 2006. For a lot of people, even people who haven’t yet read the book, the very idea that somebody would be coming out in 2014 with a new book on this subject indicates that Kilgour and Matas did not dig a dry hole, they struck something very deep indeed. No journalist in their right mind would be putting so much effort, seven years of effort, into writing a book on the subject otherwise.

Question: What do you want to say to the readership of Epoch Times?

Ethan Gutmann: Thank you for that question, although this may not be pleasant for either of us. I’m sorry about that. But brace yourself.

Well, my book is 355 pages long. It has over 70 images. So yes, I am inherently claiming that a book can do something very magical, very profound, that a 900-word article cannot achieve—although you will probably have to experience that for yourself rather than take my word for it. As for access speed, you can download it for your kindle on Amazon in about three minutes—I know, I know, I hate to break the instant gratification cycle, but three minutes is not really that long. And finally, I’m afraid the publisher does have to charge something.

But hey, this book was hell on my financial well-being so a few books sold here or there aren’t going to make a difference at this point. So go buy a used copy, borrow a copy, steal it for all I care—but for God’s sake, open the book, in the middle somewhere, skip to the ending if you like, wipe ketchup on the pages, whatever! Just start reading. I did not write this book to be used as a human rights prop. It’s meant to be read, and yes, it is meant to make you think, not to think for you. Actually I wonder if that worries some people.

What about my potential readers who practice Falun Gong? I wonder if the problem is that they believe they know the history already. But have they considered the idea—just the possibility—that they may not actually know it as well as they think? Could they be surprised by the book? Would that necessarily be a bad thing? I sense that some practitioners worry about that, too; that I will be disrespectful in some way, or just stupid. Well, can they take heart in the fact that practitioners peer-reviewed the book as well as non-practitioners? It’s no secret; it’s in the acknowledgements.

Or perhaps practitioners or Chinese dissident types think they will be bored? But anyone who knows me at all knows that I wouldn’t have bothered to finish writing a dull book. Or a legal tome. Or a textbook. Because I felt that underneath all the questions about “did this really happen?” the real question is “why should I care?”

And that’s the essence of the book: to get close to people, to get close enough to the witnesses where you can touch them and maybe even smell their sweat.

The most disappointing thing for me personally—it’s quite devastating to discover this actually—is that there are people out there, particularly in the U.K., people who I like and admire, people who are truly dedicated to this issue—they consider the forced organ harvesting to be a crime against humanity—yet they find endless excuses to avoid sitting down and reading something which I’ve not only given a serious portion of my life to, but could help empower them in a collective struggle to end this monstrous crime. Words can’t describe…

Question: You brought up the issue of caring…

Ethan Gutmann: But I can’t force people to care. Yes, I want people to touch each other, across the miles, across the language and cultural barriers. And that’s why there is art in my book, not just science. And yes, these witnesses are interesting people, many with lives, quite frankly, more interesting than my own. They risked their lives and the lives of their families to be in this book. These people are waiting for you, like ghosts that can never be set free until they reside in your mind. If you care, you should embrace them.

Question: What about governments what do you want them…?

Ethan Gutmann: I’m not so worried about governments because staffers read. They have the time to read. If they don’t read, they are fired. I’m travelling around the U.K. right now with Kilgour and Matas. We get a respectful reception by governments, in general, because the staffers have read our stuff and realise it is pretty solid. These days, journalists don’t have the time to read. No. This was ultimately written for the people.

Ethan Gutmann: Well this is not a legal question. There is no law in China really. By necessity, this is a book about human struggle. Nor do I simply present Falun Gong as victims in this book.

I’m not saying that it is the ultimate history of Falun Gong or the greatest thing ever written or the final word on this subject. Not at all! But I am saying that it is a history that is worthy of being read and discussed and, yes, challenged.

As for the politics of this atrocity—in a funny way I’m feeling a bit more optimistic that we will see changes soon. We were just in Wales. Second time actually. And it was a very good reception compared with the first time. Clearly they want to do something about this issue at the policy level, and yet…and yet…the truth is we’ve always known that a lot of these things are true.

Take the case of the Soviet Gulags. Throughout the West we knew they existed. And yet it took a book, really only one chapter of Alexander Solzhenitsyn’s ‘The Gulag Archipelago’—I mean, the first chapter compares the gulags to a sewage processing system. Such a powerful metaphor! Even if the West only read that chapter, it forced people to look again at the gulags, to face the truth. Well I am not comparing myself to Alexander Solzhenitsyn. Not at all! Yet I should point out that you can read my first chapter on Amazon without spending a penny. And when I hear people say ‘well, I think I will find the book too disturbing, too upsetting for me’? I’m sorry. We all have to do our part. The most dangerous thing we face as a species—other than Ebola and viruses and plague—is our own human propensity to slip into genocide.

And it is happening now. In my book, I interview a Falun Gong practitioner who was given an organs-only examination along with 500 other prisoners, mainly Falun Gong, in May 2013. She is 56 years old, the same age as me. Neither of us are going to be around forever. Shouldn’t we hear her testimony? And if not now, when?

National Review has described Ethan Gutmann as a “mammoth sociological, political whistleblower.” His book “Losing the New China” won the “Spirit of Tiananmen” award, New York Sun’s “Best Book of the year,” and the “Chan’s Journalism Award” for outstanding writing. Gutmann’s seminal research into Chinese Internet surveillance, the Laogai System, and the intersection of Western business with Chinese security objectives has received sustained attention in Washington, London, and Brussels at the government and intelligence level.