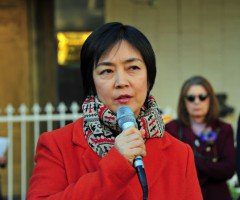 “1.5 million people from more than 50 countries and 160 U.S. Congress members call upon the United Nations High Commissioner for Human Rights to press China for an immediate end to forced organ harvesting from live Falun Gong practitioners,” said spokesman Dana Churchill at the event.

DAFOH is a nonprofit organization founded by medical doctors from all over the world to stop unethical and illegal organ harvesting.

“Since the Chinese government’s practice of forced organ harvesting from live Falun Gong prisoners of conscience was first confirmed in 2006, there has been an abundance of information supporting this allegation and a deluge of outcries from around the world against this heinous crime against humanity,” said Churchill.

Several researchers concur that the great majority victims of China’s forced organ harvesting have been Falun Gong practitioners. Falun Gong (also called Falun Dafa) is a peaceful spiritual practice based on the principles of truthfulness, compassion, and tolerance.

Yo Yo Fan, an administrator at a school, noted that he had two male teachers who had been arrested because they practiced Falun Gong. “They suffered severe torture,” he said.

However, later a change occurred in how they were treated. “Suddenly there were regular physical examinations,” he said. “Their meals also improved.”

“At the same time, they often heard of ambulances coming to the jail. Many Falun Gong practitioners found this very puzzling. When those in the jail heard about the organ harvesting, they realized the real purpose of such physical examinations and why the ambulances came there.”

Apparently most Chinese realized what was going on.

“They already knew that the regime took organs from people who were alive. They also already knew that hospitals advertised that they could easily find matching organs and do organ transplants very quickly,” he said.

Physical exams proved to be a marker for death. “Many practitioners disappeared after their physical exams,” she said.

Jenifer Zeng was a former Chinese Communist Party member who belonged to China’s upper middle class and then became a prisoner of conscience in China and a human rights activist in exile. In telling her story, the film “Free China” examines the journey to freedom taken by millions of Chinese citizens who have chosen to speak up against injustice in China.

Zeng, who was granted political asylum by Australia and now lives in the United States, is the author of the bestselling book, “Witnessing History: One Woman’s Fight for Freedom and Falun Gong.”

Zeng shared her experience at the rally. She had been torn away from her young daughter and put into a labor camp. At school her daughter was brainwashed that her mother was a terrible person and eventually tried to persuade her to denounce her faith in Falun Gong. Zeng was devastated and despondent. She refused to recant her faith, causing longer hours of work and punishment. Finally, the police threatened to send her to another place in Xinjiang if she didn’t recant her faith; and told her that “once you are there, never dream of coming back.”

Trying to maintain her composure, she shared her experiences. Zeng said she recanted her faith, Falun Gong. She was later released and eventually escaped to the West. She was finally reconciled with her daughter. Zeng helped make the movie “Free China,” telling her true story so the public would understand the devastation, torture, and brainwashing Falun Gong practitioners and their families experience in China.

“Free China: The Courage to Believe” received the 2013 Hollywood Media Music Award for music in the short documentary category on Oct. 20 in Hollywood.

Dr. Jacob Lavee, an advisor for DAFOH from Israel, discovered his patients were going to China for rapid transplants.

He said, “Some were promised an organ on a certain day—something that suggests China has an ‘on-demand’ organ supply.” This is consistent with many staged inquiries by Western medical doctors for organ availability during the investigation.

In a previous interview, Churchill said, “To obtain the best and freshest organs, organs are taken while the victim donor is still conscious, since anesthesia degrades the organs, they use muscle relaxants to prevent spasms during the operation. These prisoners of conscience are almost always killed during the operation depending on which organ(s) is taken.” This is apparently typical in PLA hospitals. It has been reported that they are euthanized by injection, which may be occurring in non-military hospitals.

Because China has no organ donor system, there is no waiting list for organs. Though many organs might be taken during the procedure, such as skin, corneas, and internal organs, they are frequently wasted.

Falun Gong was considered a blessing to the Chinese people. Better health, clearer minds, and peaceful citizens were seen as having a positive effect on society by many leaders.

China’s top leader at the time, Jiang Zemin, was aware that his wife was doing the Falun Gong exercises at home.

However, Jiang received a report from the country’s Sports Authority that at least 70 million Chinese (1 in 17) were practicing Falun Dafa in 1998—it was first taught to the public in May 1992. The Chinese Communist Party (CCP) had fewer than 70 million members at that time, which, in Jiang’s mind, may have constituted a threat to the CCP’s power.

Editor in chief for Chinese Affairs, Wu Fan, said, “Over the past 5 months, ‘Doctors Against Forced Organ Harvesting’ and volunteers from around the world have been collecting signatures to stop the atrocity of forced organ harvesting.”

“Media have reported that one of the most notorious perpetrators [of organ harvesting], Zhou Yongkang, is under house arrest for corruption, for attempting to assassinate China’s leaders. … Yet his involvement in organ harvesting is not one of the charges. It is our hope that all of the real perpetrators will be named, arrested, and punished,” said Wu.

“Such acts cross the boundary of what is human. Not only is it an insult to modern civilization; not only should the 1.5 million who signed the petition object, but all good people everywhere should take action to stop this evil crime,” said Wu.

Ms. Hatfield also represents another association called the American Association of University Women. They are very active in the U.N. and have consultative status. She said, “We are very much in solidarity with what you are trying to do in righting this wrong.”

“It’s especially fitting on this recognition of Human Rights Day by the U.N. that we are drawing attention to this flagrant abuse of those very human rights—forced organ harvesting of prisoners of conscience by the Chinese government.”

Ms. Hatfield commended and congratulated Doctors Against Forced Organ Harvesting for their dedication to righting this abusive practice and their advocacy and obtaining 1.5 million signatures.

“Let us hope that Doctors Against Forced Organ Harvesting will be able to celebrate their victory over this abuse,” said Hatfield.

In July 2006, an independent report was compiled by David Kilgour, a former Canadian secretary of state (Asia Pacific) and David Matas, a Canadian human rights attorney, talked to additional witnesses in China. Although the authors conceded that they were unable to conclusively prove the allegations due to the restrictions on their investigation imposed by the Chinese regime, the Kilgour and Matas report nevertheless provides a critical amount of circumstantial evidence that systematic organ harvesting is indeed occurring in China.

“David Matas and I found 52 kinds of evidence of the nature of this atrocity since 2001,” said Kilgour.

Kilgour gave one example that he often uses from Sujiatun, Liaoning Province, where Bo Xilai was the governor. He said, “I met a witness who told me that her husband was a surgeon, and he has removed 2,000 corneas from the eyes of Falun Gong practitioners in Sujiatun over a two year period in 2003.”

Matas, in a report to the Canadian Parliament said, “The number of liver transplant facilities, for example, multiplied to 500 last year (2006) from 22 before [the persecution began in] 1999.”

The authors sadly concluded that the allegations of systematic organ harvesting specifically targeting Falun Gong followers are true. Their report further notes, “government-sanctioned persecution of innocent victims as practiced by China represents a ‘new form of evil in the world.’”

In his 2012 book, “State Organs,” writer Ethan Guttman’s best estimate is that 65,000 Falun Gong were killed for their organs during the years 2000–2008 from about 1.2 million practitioners interned in China’s forced labor system.

A police signature is enough to send anyone to these forced labor camps. As Mark Mackinnon of Canada’s Globe and Mail put it recently, “No charges, no lawyers, no appeals.”

In 2007, a U.S. government report estimated that at least half of the inmates in 340 camps were Falun Gong.

Many nations have taken action to limit access by their citizens to Chinese organs. Israel enacted legislation preventing its citizens from going to China for organ transplantation. The 2008 law prohibits insurance companies from paying for the organs and transplants.

Other countries such as New Zealand have yet to ban Chinese organ tourism. Australia’s New South Wales is considering a bill that would make the crime equivalent to manslaughter.

A bill introduced in the Canadian Parliament on Dec. 6 proposes to sanction all persons knowingly involved in organ harvesting. Canadian citizens as well as foreigners on Canadian territory will be subject to the law. The legislation will establish a list of individuals believed to have engaged in organ harvesting, and will require documentation of the source of the organs used in transplant operations.

Spain has laws that will result in prison terms of 3–12 years for those violating the 2010 law.

There are transplant problems seen in Chinese transplants according to UCLA. “The practice of forced organ harvesting from live prisoners is also of specific concern to California as UCLA has reported cases in which patients who have transplantation done overseas, particularly in China, have higher risk of relapse,” said Churchill.

Several survivors of the CCP’s persecution who escaped China and settled in Southern California were present at the rally to testify about their horrific suffering, including blood testing.