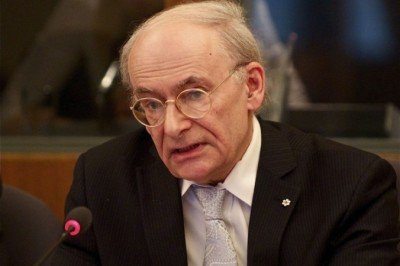 Upon learning about the Holocaust in his youth, David Matas felt the urge to do something in response to the massive crime against humanity. He later found his calling in taking up human rights causes.

“Human rights became a vehicle to be able to do something,” said the Winnipeg-based international human rights lawyer, who over the years has devoted his time to many worthwhile causes.

That work was recognized on July 10, when Matas received the Carthage International Award in Rome in the category of Peace and Defence of Human Rights.

The award is granted annually by the International Carthage Academy, a non-profit organization that presents awards in 16 different categories to those in Italy and abroad who have contributed to the development and dissemination of culture and knowledge in various fields.

The aim of the award is the “elevation and promotion of the progress of peoples, the search for truth, freedom, justice, and peace, and therefore of universal fraternity.”

Past winners include actor Antonio Banderas, director Franco Zeffirelli, and Italian president Giorgio Napolitano, among others.

It was back in the 1970s that Matas became involved in his first human rights cause: tracking down Nazi war criminals. Since then he has worked on a number of initiatives, including combating apartheid in South Africa and the suppression in the former Soviet Union and Eastern Europe while under communist rule.

Most recently, Matas has focused on the persecution of Falun Gong, a spiritual meditation practice that for the last 15 years has been brutally repressed by the communist regime in China.

In 2006, together with former Canadian Secretary of State David Kilgour, Matas published a report confirming claims of the state-sanctioned harvesting of organs from living Falun Gong prisoners of conscience, who die during the transplantation process.

The two men subsequently travelled to many countries in Asia and elsewhere to alert government officials about this abuse in the hopes that they would pass legislation to prevent their citizens from seeking a new organ in China.

For their work, Matas and Kilgour were nominated for the Nobel Peace prize in 2010.

During the award ceremony in Rome last week, audience members watched a short film about illegal organ harvesting in China and the efforts of Matas and others in exposing the persecution of Falun Gong adherents, which brought the audience to their feet in a standing ovation for Matas.

“The audience was I would say very captured by the issue, and the jury (International Carthage Academy) as well by this issue of killing of Falun Gong for their organs. I got a number of comments afterwards—congratulations from the people there, [and people] expressing concern and solidarity,” Matas said.

The fact that the Europe-based academy, which functions in Italian, chose him for the award means that his message and efforts are being noticed, he said.

“I sometimes wonder whether anyone’s listening when I’m talking, and so the fact that I got this award from a jury that is so far away and is functioning in a foreign language gives me some confidence that the message is being heard, and it’s getting out, coming across.”

Staying with a human rights cause and seeing it through is challenging work, Matas notes. Many simply get frustrated and abandon their initiative when they fail to see progress.

“One of the things that keeps me going is that I realize it requires a lot of work over a long time to get actual results,” he said.

Over the years, Matas has seen big changes and positive outcomes, such as the end of the apartheid in South Africa and the collapse of the Soviet Union.

“I’m convinced that human rights work groups are sustained after a long period of time, and however bad things are, they would be worse without the effort.”