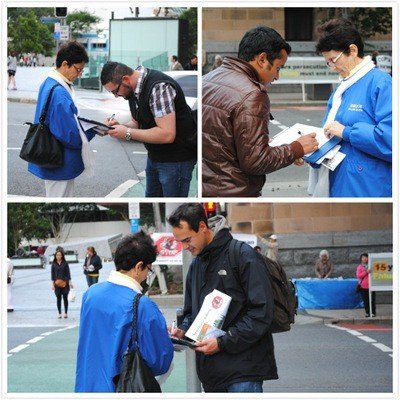 The Australian Medical Association of Queensland held a Junior Doctor Conference on June 28, 2014 in downtown Brisbane. Falun Dafa practitioners held a series of activities to raise awareness in the medical profession and the local community about the ongoing crime of forced organ harvesting in China.

Falun Dafa practitioners held a series of activities downtown Brisbane to expose the persecution.Many people in the medical profession, including doctors and professors, signed the petition to condemn the atrocities after learning about the Chinese Communist Party’s (CCP) brutal suppression of Falun Gong and state-sanctioned forced organ harvesting from living practitioners.

After signing the petition, a doctor said to a practitioner that it was unethical to remove anyone’s organs for any reason without the person’s voluntary consent, “Everyone should have the right to decide where his organs go. If we could do something (to stop live organ harvesting), we all have the responsibility to make sure that we do so. We should try to prevent such illegal actions.”

Another doctor signed the petition after reading the materials and brought some of it back for his coworkers. He also told the practitioners to wait a little longer outside the meeting place so that more doctors could learn about this.

A passerby named Ken encouraged the practitioners to keep up their efforts in exposing the violence of the persecution. “I can’t agree with what the Chinese regime did,” Ken said. He told the practitioners that they should help more people become aware of what is happening in China. 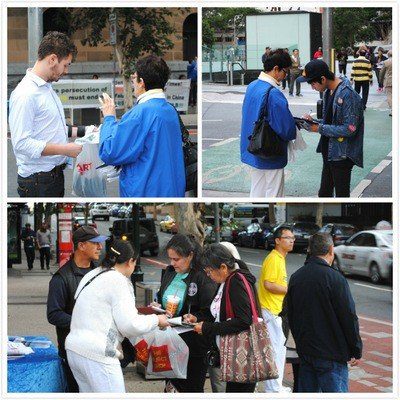 Another passerby, Heather, was glad to see the practitioners’ efforts to raise awareness. “It’s beyond me that such an unjust thing still exists. How could this be happening and be concealed in a society nowadays full of free information?”
Falun Dafa practitioner Nina said that currently DAFOH (Doctors Against Forced Organ Harvesting) is petitioning for University of Sydney to remove the honorary title that it had given to Huang Jiefu, former Minister of Health. Huang is mainly responsible for forced organ harvesting from living Falun Dafa practitioners in China after the University of Sydney gave him this honorary title. “DAFOH hopes that the University of Sydney can reconsider whether a man who has committed such a crime deserves to continue holding this honorary title,” Nina said.

Nina stressed, “In China Falun Dafa practitioners are the largest group of victims of organ harvesting. This is murder and is beyond anything we could possibly comprehend.”