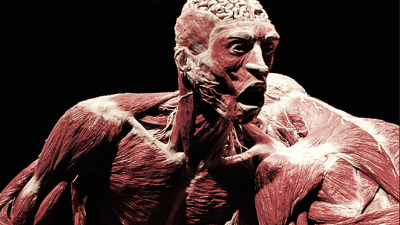 Dead human bodies are being injected with plastic and sent on a world tour, making German anatomist Gunther von Hagens extremely wealthy. So, what is wrong with that, you ask? Must be educational?

The Body World exhibition, as it is called, has been on a world tour for decades, but the snag is, claims have been made that the bodies of executed Chinese prisoners – which include prisoners of conscience – are spliced open and put on display around the world for the paying public, which includes many school groups.

An investigative journalist Ethan Gutmann is an expert on the topic of forced organ harvesting in China, where prisoners of conscience, mostly Falun Gong practitioners – a peaceful spiritual discipline- are killed for their organs.

He challenges von Hagen to allow the dead bodies in the exhibition to be DNA tested. “We now have a show which is travelling around which may have the DNA of murdered prisoners of conscience,” Gutmann said in an interview with NTD Television. “I’m not an expert, but these look Chinese.”

“There is another Body show going around the world. It’s actually bigger. It’s run by Von Hagens’s former manager Sui Hongjin,” Gutmann said in a statement, which was read out to the press and public.

“His bodies come from the PSB [Public Security Bureau]. His sponsor, Premier Exhibitions admits it. Sui has plastinated an estimated thousand bodies. We have a saying in English: every criminal makes one mistake. Could shipping murder victims loaded with DNA around the free world qualify as a mistake? It sounds crazy that someone would take that chance. But let’s find out.”

Gutmann continued: “If any samples are Chinese we can match them with DNA from Chinese families who lost a loved one because they were Falun Gong. That will take years. But it’s worth it, because the families have the moral authority in this case.”

Sui Hongjin was von Hagens’s former apprentice who split from von Hagens’s operation in 2002 and began operating his own plastination factory, supplying, among others, the plastinated body touring company called Bodies: The Exhibition.

While von Hagens denies using executed Chinese prisoners any longer, Bodies: The Exhibition carries a disclaimer saying that some of its bodies came from the Chinese police.

Gutmann said his approach to calling on DNA samples from von Hagens is two-pronged: first, it will establish whether Chinese bodies were used in his exhibits, which allows for the next step, collecting the DNA of family members of Falun Gong practitioners who were killed in China, so as to test for any relationship.

Secondly, it will put pressure on the exhibition that Sui is associated with, to also provide DNA about the bodies that it has. The rivalry between von Hagens and Sui should propel him to cooperate, Gutmann said.