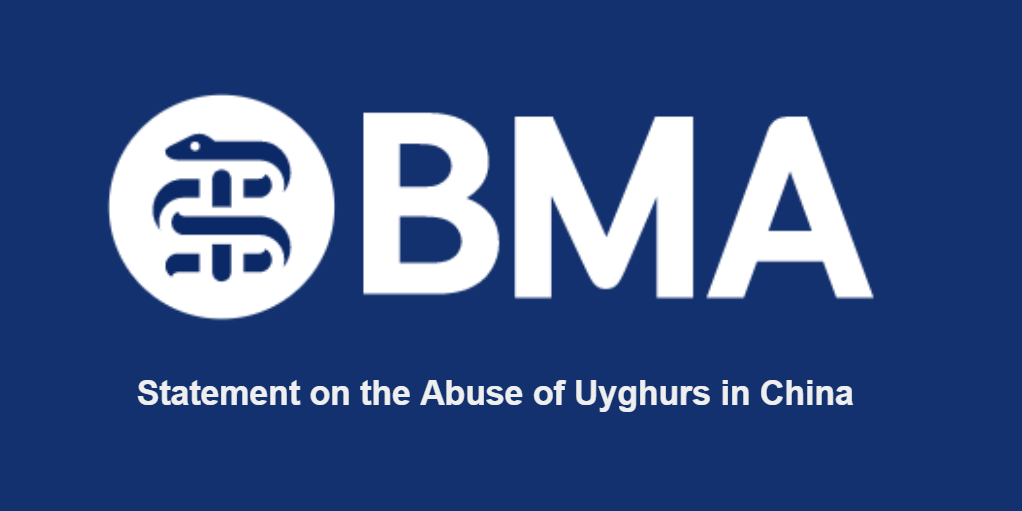 BMA and AMRC Issue Statement on the Abuse of Uyghurs: Alarmed about Organ Harvesting

British Medical Association (BMA) and cosignatory organisations respond to the abuse of Uyghurs in China.

We, the undersigned and the organisations we represent, in advance of the report of the Uyghur Tribunal, express our grave concern regarding the situation in China and the continuing abuse of the Uyghur population of the country as well as other minorities.

We are particularly alarmed by the reports of organ harvesting, forced birth prevention, and the use of genomics data for racial profiling.

We are deeply troubled by the evidence of forced birth prevention in China against the Uyghurs.

Forced sterilisation, mandatory intra-uterine devices, and non-optional birth control have all formed part of the Chinese government’s campaign against the Uyghurs in Xinjiang. Alarmingly, official statistics from the Chinese government indicate there was a 48.7% decline in birth rates in ethnic minority areas of Xinjiang from 2017 to 2019. There is no evidence such policies have abated.

The UN special rapporteurs have continued to raise concerns surrounding organ harvesting from Uyghurs in China, which overwhelming evidence suggests continues to this day, with hearts, livers, kidneys and corneas being the most commonly taken.

Our organisations are also aware of the use of the DNA of Uyghur individuals, without their consent, in the field of genomics. This has been used for racial profiling including surveillance and the selection of individuals to exploit for organ harvesting. We are disturbed that such unethical practices could be condoned in research in China.

As representatives of medical organisations, we are appalled by medical complicity in actions which constitute fundamental abuses of human rights. We expect the findings of the Uyghur Tribunal, due to be announced on Thursday 9 December 2021, to condemn China’s treatment of the Uyghurs and other minorities in the strongest possible terms.

We urge the UK government and international actors to exert pressure on the Chinese government to cease its inhumane actions towards the Uyghurs, to respect human rights, and to allow independent UN investigators into the Xinjiang region.

Fiona Donald
President of the Royal College of Anaesthetists