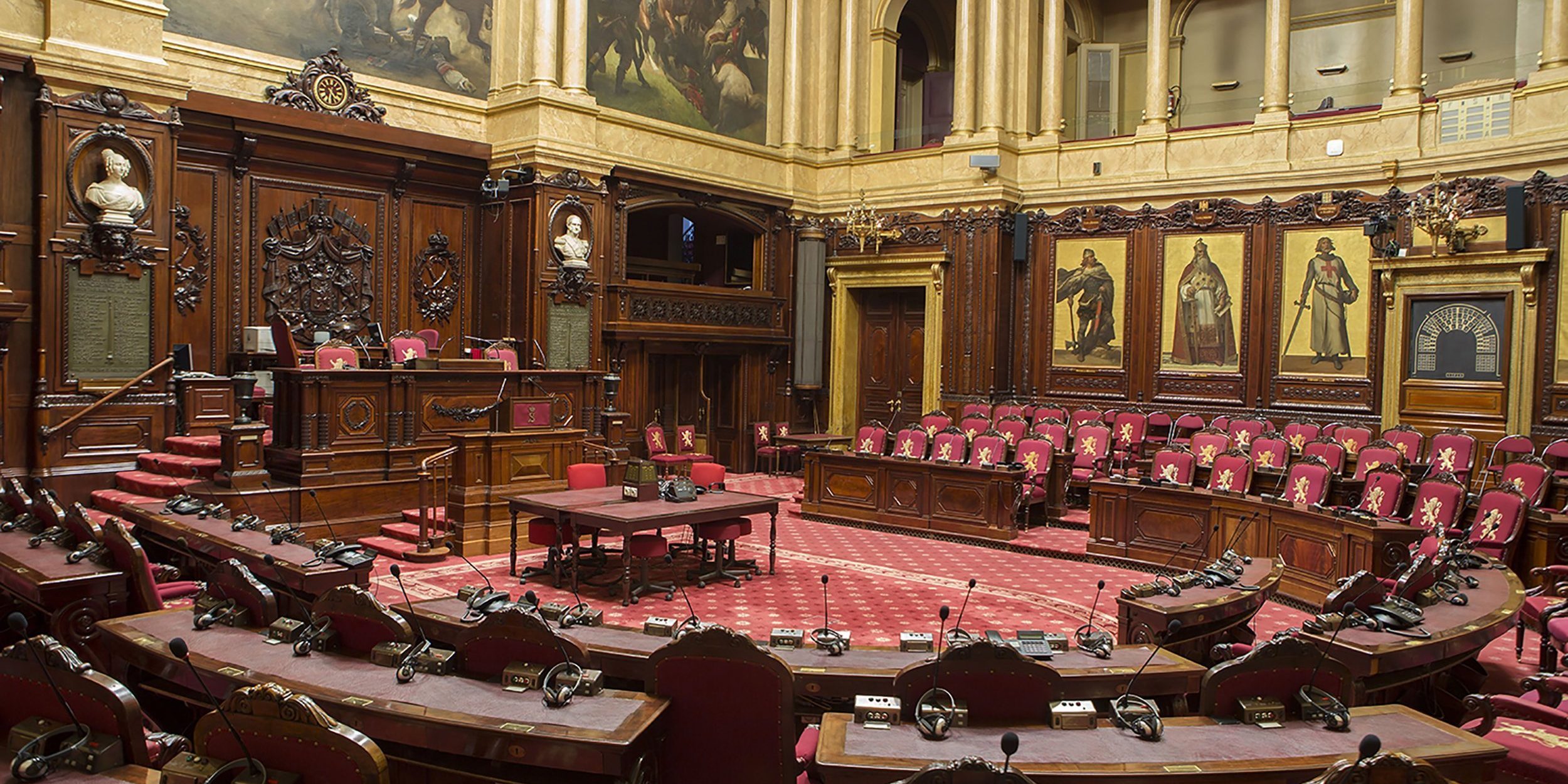 On the 12th May, 2020, the Belgian Senate passed a resolution condemning the continuing practice of forcibly removing organs from prisoners of conscience in the People’s Republic of China, particularly from Falun Gong supporters and Uighurs.

Please find below the English translation of the text adopted and the introductory speech.

Proposal for a resolution on condemning the continuing practice of forcibly removing organs from prisoners of conscience in the People’s Republic of China, particularly from Falun Gong supporters and Uighurs

A. having regard to the Convention against Torture and Other Cruel, Inhuman or Degrading Treatment or Punishment of 10 December 1984, ratified by China on 4 October 1988;

B. having regard to the Guidelines on Transplantation of Human Cells, Tissues and Organs published by the World Health Organisation (WHO) aimed at clarifying international standards on organ transplantation;

D. having regard to the European Parliament’s written declaration of 27 April 2016 on stopping organ harvesting from prisoners of conscience in China (0048/2016);

F. having regard to the judgment of the China Tribunal of 1 March 2020, which concluded that forced organ harvesting in China continues to take place to this day;

G. having regard to the repeated efforts by Belgium and the European Union to obtain clarification of the issue;

H. whereas in 2015 the UN Committee against Torture recommended that China ‘initiate an independent investigation to examine allegations that some Falun Gong practitioners may have been subjected to the practice’ [organ removal without consent]; whereas to date no such investigation has been carried out;

J. whereas the killing of religious or political prisoners in order to sell their organs for transplantation is a flagrant and intolerable violation of the fundamental right to life;

K. whereas China does not disclose information on the number of executions in general, and the number of transplants in particular,

1) Urge China to extend a standing invitation to the special procedures of the Human Rights Council and to respond positively to the outstanding requests of the UN Special Rapporteurs and the UN High Commissioner for Human Rights to visit the country to carry out their investigative work with a view to ensuring full transparency on organ trafficking and transplantation;

2) encourage the European Union to reiterate its concern about the problem of forced organ harvesting in China, to take the necessary initiatives to allow independent investigations into the matter, to call for those involved in this crime to be prosecuted and to call for an immediate end to these practices;

4) invite China to publish annually a detailed quantitative report on transplantation in accordance with Guideline No. 11 on gold transplantation of the World Health Organization (WHO), of which China is a member;

5) in the event that China, as it has committed itself to do, demonstrates that it has indeed undertaken to establish a national transplantation system based on voluntary organ donation, to offer – jointly with the European Union and its Member States and with the participation of international experts, health professionals and regulatory bodies – any advice, expertise and sharing of good practices that would facilitate the Chinese Government’s efforts to set up such a system.

The president of the Senate,

The clerk of the Senate,

In 1984, the People’s Republic of China (hereinafter “China”) legalized the practice of removing organs from prisoners after they had been executed, provided that the detainee or his relatives had given their consent beforehand. In 2007, China outlawed organ trafficking, and in 2015, it formally stopped organ harvesting from prisoners executed without their prior consent. As a result of this reform, positive steps have been taken and today the transplant system is officially based on organ donations.

The challenge for China today is the full implementation of this law. Questions remain as to the reality of the transplant figures announced by the Chinese regime, which does not disclose information on the number of executions in general, and the number of transplants in particular. The official figures available would therefore not reflect the reality of the continuation of large-scale organ harvesting from non-consenting donors.

There are reports that Chinese citizens have been and are still being killed for the purpose of harvesting their organs, and that organ donation is carried out on a non-consensual basis. In October 2016, David Kilgour, David Matas and Ethan Gutmann published the report “Bloody Har- vest / The Slaughter: An Update” (1), in which they stated, on the one hand, that the number of organ retrievals is much higher than what is suggested by official Chinese government statistics (where the government estimates that about ten thousand transplants take place each year, the figures could be as high as sixty thousand to one hundred thousand, according to the authors). The report also suggests that prisoners of conscience, including Falun Gong practitioners and Uighurs, are specifically targeted for organ harvesting.

The practice of Falun Gong is a very ancient method of qigong (traditional Chinese exercise and science of breathing based on the knowledge and control of the breath and combining slow movements, breathing exercises and concentration), including energetic meditation exercises. Its three fundamental principles are authenticity, benevolence and tolerance. The Uyghurs are a Sunni Muslim ethnic group, a minority in China but a majority in the north-western province of Xinjiang. Turkish-speaking, the Uyghur people are also present in Kazakhstan, Uzbekistan, Kyrgyzstan and Turkey.

More recently, the China Tribunal, chaired by Sir Geoffrey Nice (who was formerly chief prosecutor in the trial of Slobodan Milosevic at the International Criminal Tribunal for the former Yugoslavia), carried out the first independent legal analysis of all available evidence concerning the forced removal of organs from prisoners of conscience in China. The objective was to determine whether organ harvesting is taking place and what criminal offences, if any, may have been committed by the State or State-accredited bodies, organizations or individuals in China who may have carried out forced organ harvesting. The Tribunal issued its abbreviated finding in June 2019 and its full judgement on 1 March 2020.

In its judgment, the China Tribunal concluded, inter alia, that “forced organ harvesting has been practiced for years throughout China on a large scale and Falun Gong practitioners have been one – and probably the main – source of supply of organs. The concerted persecution and medical testing of Uighurs is more recent and evidence of forced organ removal from this group may emerge in due course. The Tribunal has had no evidence that the important infrastructure associated with the Chinese transplant industry has been dismantled and, in the absence of a satisfactory explanation as to the source of the organs readily available, it concludes that the forced removal of organs continues to this day”.

The phenomenon of organ removal without consent is linked to human rights issues (death penalty, ill-treatment, extra-judicial executions and suspicions of “organ harvesting” from other prisoners, including Falun Gong practitioners), but it is also a public health issue, as European citizens may be tempted to turn to clandestine markets to find organs suitable for transplantation. The World Health Organisation (WHO), of which China is a member, adopted in 2010 a set of guiding principles on transplantation of human cells, tissues and organs (2) to clarify international standards on organ transplantation. Principle No. 1 requires donor consent for the removal of an organ for transplantation, Principle No. 10 requires the traceability of organ transplants, and Principle No. 11 requires that donation activities be transparent and open to scrutiny.

The issue of illicit organ procurement regularly attracts the attention of the international community. The European Union (EU) has raised the issue on several occasions, and has expressed its concerns on the matter to the Chinese authorities in the various fora concerned.

In December 2013, the European Parliament adopted a resolution on organ harvesting in China (3), in which it expressed its concern about credible and continuing reports of systematic, state-sponsored and non-consensual organ harvesting of prisoners of conscience in the People’s Republic of China, including a large number of Falun Gong practitioners detained for their religious beliefs, as well as members of other religious or ethnic minority groups. In particular, it called on the Chinese authorities to immediately cease organ harvesting from these prisoners and to allow the UN Special Rapporteurs on Torture and Other Cruel, Inhuman or Degrading Treatment or Punishment and on Freedom of Religion or Belief to investigate organ transplant practices in China.

In April 2016, the European Parliament issued a written declaration on stopping organ harvesting from prisoners of conscience in China (4) in which it called on the Commission and the Council to implement the Parliament resolution adopted in 2013 and stressed the urgency and importance of conducting an independent investigation into the organ harvesting that persists in the People’s Republic of China.

In its Annual Report on Human Rights and Democracy in the World 2018, adopted by the Council of the European Union on 13 May 2019, the European Union also recognised that “human rights violations and abuses against persons belonging to minorities, including persons belonging to national or ethnic, religious and linguistic minorities, have not ceased in 2018.In the course of the year, it became clear that the Chinese authorities forced several hundred thousand persons belonging to minority groups to go to internment camps, supposedly to provide them with vocational training, to enable them to “escape from poverty”, “backwardness” and the “temptations” of radical religious beliefs (5)”. There are allegedly links between these camps and operations to remove living organs for transplants.

During the Universal Periodic Review (UPR) on China in November 2018, Belgium expressed concern, inter alia, about whether the Government of the People’s Republic of China planned to respond positively to the outstanding requests for visits by special rapporteurs and to ratify the International Covenant on Civil and Political Rights, the Optional Protocol to the Convention against Torture, the International Convention for the Protection of All Persons from Enforced Disappearance and the Rome Statute of the International Criminal Court.

Belgium has also supported several public statements made in the framework of the Human Rights Council and the UN General Assembly in July and November 2019. Our country is therefore following this situation closely and does not hesitate to express its concerns in the various forums concerned. Within the framework of our bilateral relations with China, this subject is regularly raised at meetings, as was the case during the recent Belgian economic mission to China.

Given the seriousness of the problem and the significant consequences in terms of respect for human rights and the preservation of public health, there is an urgent need to increase the visibility of the phenomenon, to collect more data and to ensure that the citizens of the world are not illegally killed for their organs. It is therefore of the utmost importance for our country to continue its efforts and deploy all available means to ensure that these illegal and inhumane practices are no longer used.