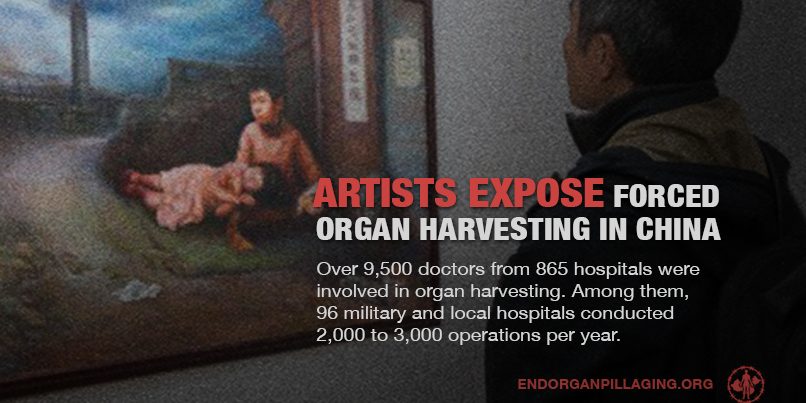 Before 1997, artist Li Jinyu was  traveling to Tibet, Canada, and other places, looking for the meaning of life.

In her paintings, she would depict ethnic themes and traditional Chinese cultural subjects, as well as current happenings showing the conflict between man and the environment. And even though her subjects were mostly Eastern, her painting style was Western—oil paining.

When she became a Falun Gong (also known as Falun Dafa) practitioner in 1997, she felt she found what she was looking for.

“As I understand, the mission of an artist is recording the most important things in history, so I think that Falun Dafa is the most important issue in contemporary history and for such a great thing, I have to use realism to paint that because it is so strong; it’s very true, very honest,” said Li recently, in New York. She was standing in a tiny gallery hosting a bare-bones art exhibition, surrounded by works depicting a contemporary injustice.

In 1999, the meditation practice she found that had brought light to her life was banned in its country of origin; its practitioners turned outlaws overnight. She and other artists have felt the need to document this.

Each painting she did had many stories behind it, she said. “So many of my friends were persecuted and even died.”

“Mom where are you?” by Li Jinyu at an exhibition presented by AAFOH (Artists Against Forced Organ Harvesting) in New York on May 10, 2016. (Benjamin Chasteen/Epoch Times)

Li and eight other artists from Europe, Australia, Canada, Taiwan, and the United States are part of a newly formed alliance, Artists Against Forced Organ Harvesting (AAFOH), which took shape in November last year. Through the alliance, the artists seek to bring international awareness to what remains China’s most heinous state-sanctioned crime of using Falun Gong practitioners’ bodies for profit.

As a call to other artists to join the alliance and to publicize the issue, AAFOH held its inaugural one-day show and press conference in New York on May 10. The exhibition included oil paintings, traditional Chinese paintings, visual dimensional animation, and computer-generated art.

His Body Was Still Warm

Jiang Li who was a guest speaker at the art exhibition by AAFOH. Li’s father died in a forced labor camp in China after being persecuted by communist authorities for practicing the spiritual discipline Falun Gong. (Benjamin Chasteen/Epoch Times)

A guest speaker at the event was Jiang Li from Chongqing in China, who recounted, through an interpreter, the harrowing experience of how her father was killed for his organs.

After being forcefully taken from his home on May 14, 2008, Jiang’s father was sent to a forced labor camp for one year. On Jan. 28, 2009, the labor camp told the Jiang family to go to the morgue to see Mr. Jiang body for the last time.

Her father was in a freezer drawer. When Ms. Jiang’s sister touched her father’s face, she was surprised to feel that his face was warm. Her brother who was there as well, pulled open the drawer and they felt that their father’s body was warm all over. Suspecting that their father was still alive, they attempted to do CPR but the guard forcefully pushed the drawer back in before they could do anything, saying: “Anyway, we have the death certificate from the hospital.”

The siblings were kicked out of the morgue that day, and again the following day.

“On March 27, 2009, the Chinese communist authorities clearly told us that my father’s organs had been taken and made into specimens,” said Jiang.

Also speaking at the event was Wang Zhiyuan, spokesperson for the World Organization to Investigate the Persecution of Falun Gong (WOIPFG), which has been investigating the issue for the last 10 years.

According to Wang, the WOIPFG discovered that over 9,500 doctors from 865 hospitals were involved in organ harvesting. Among them, 96 military and local hospitals conducted 2,000 to 3,000 operations per year.

Considering that, by the Chinese regime’s own statistics, there were over 70 million people who were practicing Falun Dafa before the persecution began in 1999, this is indeed a possibility.

The WOIPFG’s findings are supported by the report “BLOODY HARVEST – Revised Report into Allegations of Organ Harvesting of Falun Gong Practitioners in China” that was published on July 6, 2006, and updated and formally published subsequently.

It shows the well-oiled system of organ harvesting from Falun Gong practitioners—a system that was overtly publicized at one time through websites in both Chinese and English, in order to attract international patients in urgent need of organ transplants.

One such website documented in the Kilgour, Matas report is the China International Transplantation Network Assistance Centre Websiteen.zoukiishoku.com (Shenyang City).

The following excerpt from the Kilgour, Matas report about the website encapsulates the blatant advertorial nature of the organ transplant business:

This website as of May 17, 2006 indicated in the English version … that the centre was established in 2003 at the First Affiliated Hospital of China Medical University ‘…specifically for foreign friends. Most of the patients are from all over the world.’ The opening sentence of the site introduction declares that ‘Viscera providers can be found immediately!’

Another page includes this statement:

…the number of kidney transplant operations is at least 5,000 every year all over the country. So many transplantation operations are owing to the support of the Chinese government. The supreme people’s court, police, judiciary, department of health and civil administration have enacted a law together to make sure that organ donations are supported by the government. This is unique in the world.

The report by Kilgour and Matas includes one of the most chilling Q&A’s one is likely to ever read.  Take this excerpt from the Chinese transplant website’s ‘question and answer’ section:

Before the living kidney transplantation, we will ensure the donor’s renal function…So it is more safe than in other countries, where the organ is not from a living donor.

Q: Are the organs for the pancreas transplant(ed) from brain death (sic) (dead) patients?

A: Our organs do not come from brain death victims because the state of the organ may not be good.

People attend an art exhibition by AAFOH (Artists Against Forced Organ Harvesting) in New York on May 10, 2016. (Benjamin Chasteen/Epoch Times)

The artists in the alliance are well aware of the evidence and the statistics pertaining to the crimes against humanity perpetrated by the Chinese regime.

Li, a Canadian citizen, has experienced this first hand, when her husband was in a labor camp but was eventually rescued by the Canadian government.

Another artist in the exhibition, Zhang Cuiying, is a Chinese-Australian artist and citizen who was illegally detained in China for eight months during which time she endured torture, beatings, and brainwashing classes in order to make her renounce Falun Gong. She was rescued through the Australian government and returned to Australia where she continues to paint and raise awareness about the ongoing persecution.

“When I was tortured, there were many Falun Gong practitioners in the same labor camp. I was lucky to have the Australian government to rescue me, but there are so many people with no one to speak for them. I want to use my paintings to appeal for them,” wrote Zhang in the statement that she sent to the event along with her paintings.

The artists hope their art can complete the picture for people who are either unaware, or untouched, by the genocide that is covertly happening in China at this unprecedented time in history, when China is the country most courted by nations around the world for economic benefit.

It is not all tragedy. Among the works is a painting to symbolize a brighter future.

One of Zhang Cuiying’s paintings is a self portrait of her meditating on lotus leaves surrounded by lotus flowers in full bloom—a reminder of the beauty and tranquility of Falun Dafa, the reason why so many have died rather than give up their belief, and a symbol of that which will overcome the tragedy: hope.