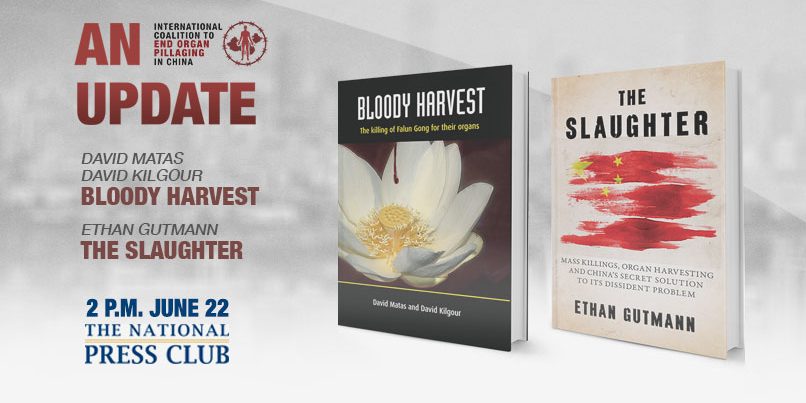 At 2 p.m. June 22 at the National Press Club, Washington, DC

Former Canadian Secretary of State for Asia-Pacific David Kilgour, investigative journalist Ethan Gutmann and Canadian human rights attorney David Matas will release a detailed and comprehensive report on China’s organ transplantation industry, dealing specifically with the use of prisoners of conscience as a profitable organ source at a National Press Club Newsmaker news conference at 2 p.m. Wednesday, June 22, in the Zenger Room.

The report comes on the heels of the unanimous House passage June 13 of legislation that expresses congressional concern regarding persistent and credible reports of systematic, state-sanctioned organ harvesting from non-consenting prisoners of conscience in the People’s Republic of China, including from large numbers of Falun Gong practitioners and members of other religious and ethnic minority groups.

The three panelists are scheduled to address the House Foreign Affairs Committee the day after their Newsmaker appearance on their findings.

The basis of the report is a meticulous examination of the transplant programs of hundreds of hospitals in China, drawing on media reports, official propaganda, medical journals, hospital websites and a vast amount of deleted websites found in archive. It analyzes hospital revenue, bed counts, bed utilization rates, surgical personnel, training programs, state funding and more.

Their findings have the potential to fundamentally shift how the organ transplantation industry, and the claims of organ harvesting from prisoners of conscience in China, are understood.

This event is open to credentialed media and Club members free of charge. No advance registration is required.