i. Volume of Evidence

The primary focus of this update is transplant volumes.  Before getting into that, we need to address the volume of evidence about the killing of prisoners of conscience, primarily Falun Gong, for their organs.

Many claims of human rights abuses suffer from having too little evidence. With this claim of transplant abuse in China, the volume problem is the opposite – too much evidence.

There are now three books on the issue, our two and State Organs, a collection of essays which David Matas edited with Torsten Trey, published in 2012. There is an NGO dedicated to combating the abuse – Doctors Against Forced Organ Harvesting (DAFOH). There is a website focused on the issue alone – endtransplantabuse.org. There have been five documentaries produced on the violation – Transmission 6‑10, Free China, Red Reign, Human Harvest, and Hard to Believe. About the killing of Falun Gong for their organs, there is more than just a collection of evidence; there is a field of knowledge.

In a world of thirty‑second soundbites and 140‑character messages, the volume of evidence is a problem. The gravity of the abuse would be a lot easier to communicate if less information were needed to show that it is happening. The number of people who have the patience to wade through all the information available on the killing of Falun Gong for their organs to come to their own conclusion is, unfortunately, comparatively small.

It may seem counterintuitive in this context to add to this problem by presenting for consideration yet more evidence. What this update addresses is not more of the same – more data in fields already explored. Rather, it explores a whole new data field – the data from individual hospitals.  We had in the past looked at particular hospitals to point out that their websites were promoting transplant tourism. Here, we look to them for transplant volumes.

Reliable transplant volume aggregates in China do not exist. The Chinese health system runs four transplant registries, one each for liver, kidney, heart and lung. Public access to the aggregate data for these four registries, which does not now exist, would be useful, if for no other reason than to cross check the proliferation of contradictory statements Chinese officials make about transplant volumes. Yet, any registry is only as reliable as the reports it receives.  These registries accumulate their data from reporting hospitals.  We cannot assume that every hospital reports all of its transplants to these four registries.

Considering transplant volumes, hospital by hospital, doctor by doctor is, in China, a mammoth task. There are almost nine hundred hospitals and between nine and ten thousand medical personnel engaged in transplants.  Moreover, cover up is not just in China an aggregate, national phenomenon. It exists as well at the doctor and hospital level. Nonetheless, to get a grip on transplant volume figures, it is a task which must be undertaken and we do so in this update.

We do this not just to attempt to make more convincing the point we have made before.  If you have gone through everything we have written up to now and are not already convinced that innocents in China are being killed for their organs, more data will not convince you.  We make the additional effort to make an additional point – that the number of innocents killed for their organs in China is far larger than we had contemplated.  The numbers stagger the imagination.

When we look at hospitals and doctors one by one, a number of features jump out. One is the sheer volume of transplants.

The total number of transplants which officials ascribe to the country as a whole, ten thousand a year, is easily surpassed by just a few hospitals. Whatever the total number is, it must be substantially more, by a multiple, than the official figure.

Second, many of the hospitals are relatively new or have new transplant wings or beds. This development would not have occurred without confidence in a continuing supply of organs for transplants. The transplant business in China has developed with not only an abundance of available organs from 2001 on, but also with a confidence that this abundance would continue into the indefinite future.

Third, concomitant with the large number of transplants, there is a large number of qualified staff.  The transplant industry in China employs a lot of people. The investment in people as well as buildings is another testimonial to the ready availability of high volumes of organs available for transplants, not only in the immediate past and present, but also, in the view of those who have committed their careers and the careers of others to this profession, into the indefinite future.

Fifth, the combination of a large professional corps, a substantial building stock and significant research speaks money.  Transplantation in China means money, lots of it.

According to statistics from the Administration of Hospitals under the National Health and Family Planning Commission (NHFPC) in July 2015,2 there were 20,918 hospitals in mainland China. 3 Among them were 1,151 Class 3 hospitals and 4,321 Class 2 hospitals. 4

Class 3 hospitals are normally located in major cities. They are typically large-scale general or specialized hospitals with over 500 beds. Among them, 705 are Class 3 Grade A (“3A”) hospitals. 5

Huang Jiefu, former Deputy Minister of Health, said in March 2006, “For a hospital to pass the evaluation to become a class 3A hospital, it must have completed a fixed target of more than five organ transplants. Organ transplantation has become a resource for competition among hospitals to reach the standard and for their branding,” “At present, the country has too many, not too few, hospitals carrying out kidney, liver, heart, and other types of transplants.”6

The World Organization to Investigate the Persecution of Falun Gong completed a comprehensive investigation of both organ transplant hospitals and doctors and determined that 865 hospitals are involved in organ transplantation. The hospitals are to be found in 22 provinces, five autonomous regions, four centrally-administered municipalities, and 217 prefecture-level cities. 7 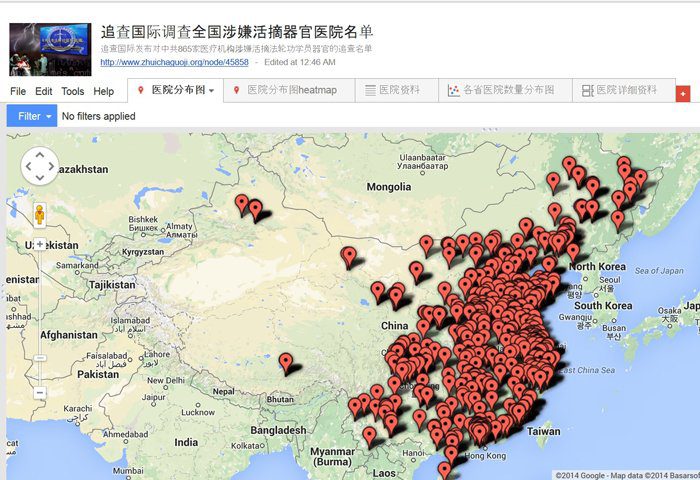 In fact more than 1,000 hospitals in China applied for permits from the Ministry of Health in 2007 to conduct transplants, implying that they had met the Ministry’s minimum transplant bed count requirements.8 In April 2015, Professor Ye Qifa from Central Medical University, Executive Chairman of the China Organ Transplant Alliance, who specializes in major organ transplantation, stated to a People’s Daily Online correspondent that, before the introduction of the “Human Organ Transplant Ordinance” in 2007, there were over 1,000 medical institutions in China performing organ transplants.9

The Ministry of Health on May 23, 2007 announced a list of 87 transplant hospitals10 approved by the Review Expert Team of the Human Organ Transplantation Skills Clinical Application Committee, authorized by the Ministry of Health, to which we refer as “national level” hospitals. Essentially, these were the most qualified and capable national-level organ transplant centres at the time. At the same time, it announced a second list of hospitals designated to perform organ transplants, issuing 18-month temporary permits to 77 transplant centres with weaker qualifications, to which we refer as “regional level” hospitals. In total, 164 hospitals were given permits to conduct organ transplants.11

On August 8, 2013, the National Health and Family Planning Commission (successor to the Ministry of Health) published a list of 165 hospitals approved to conduct organ transplants,12 including Wuhan University Zhongnan Hospital Human Organ Transplant Centre, which performs transplants from bodies with no cardiac activity. Four more hospitals were added to the list by the beginning of 2014, bringing the number of qualified hospitals to 169.13

This report focuses on the 164 hospitals which received approval from the Ministry of Health in 2007, so that we can categorize their qualifications as either national or regional level. If we exclude the 18 heart and lung transplant centres, 146 transplant centres remain. These include 23 national-level military and armed police hospitals that were among the first batch approved in 2007, 58 national-level civilian hospitals, and 65 designated hospitals.

Among the 566 kidney and/or liver transplant centres which did not receive approval from the Ministry of Health, 405 were based in large-scale 3A hospitals. These included 56 military and armed police organ transplant centres, 349 mostly-3A civilian hospitals, and 161 medium-sized hospitals (including 55 Class 3 Grade C hospitals and 106 mostly-Class 2 hospitals).

In the next section, we set out examples of different types of transplant centres, showing their qualifications, characteristics, transplant volume and capacity, and rates of growth. These examples give us an indication of overall transplant volume.

10 Notice from Office of the Ministry of Health on Registration of Medical Departments for Human Organ Transplantation
National Health and Family Planning Commission of the People’s Republic of China   NHFPC Publication [2007] No. 87
http://www.moh.gov.cn/mohbgt/pw10708/200804/18974.shtml
https://archive.is/6n8iU
《卫生部办公厅关于做好人体器官移植诊疗科目登记工作的通知》