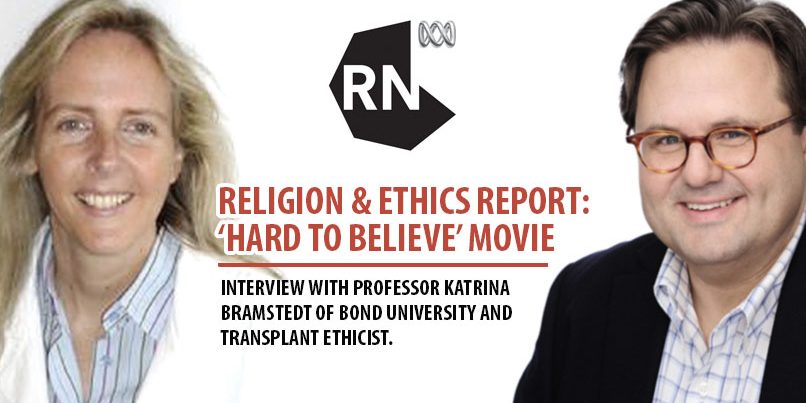 BY RADIO NATIONAL via HARDTOBELIEVEMOVIE.COM

Radio National lately interviewed Professor Katrina Bramstedt of Bond University, a transplant ethicist and participant in Hard To Believe. The transcript of her interview is presented here and the full recording can be found on Radio National website.

Andrew West: As Australia prepares to step up business with China after signing a free trade agreement, a cloud hangs over one particular “business”. A team of investigators headed by Canadian human rights lawyer David Matas found Chinese hospitals are harvesting around 11,000 organs a year. The major source is political prisoners, whose organs are often removed without anaesthetic after they have been shot but not killed. A new documentary, titled “Hard To Believe”, says members of the Falun Gong movement, Uighur Muslims and Christians are particularly targeted. One of the participants in the documentary is medical ethics professor Katrina Bramstedt of Bond University on the Gold Coast.

Katrina Bramstedt: Worldwide, we estimate there is about 113,000 transplants that occur, we believe about 10% of those are in the form of not true donations occurring, but really organ harvesting from people who have been trafficked, or forced to, “donate”. And that’s countries including China and as well as elsewhere. So that’s about 10% of the total, we think.

Andrew West: I think I read a figure of something like at least 60,000 over an 8-year period.

Katrina Bramstedt: Well, yes, certainly in China cos they haven’t until recently, had an established system, where the residents of China could even participate in a formal “donation program”. So, the Chinese government relied mostly on their prison system for the source of “donors”.

Katrina Bramstedt: Yes, yes, I have seen numbers like that, because the system just didn’t exist.

Andrew West: And the Chinese won’t keep or won’t release official figures, because why?

Katrina Bramstedt: Well, they are not known to be a nation of transparency, and with anything that they say that they are going to establish, in terms of formal programs of transplantation, they won’t allow people to come in and audit them for verification that they are in fact ethically appropriate.

Andrew West: I mean, is there any sense of shame among the Chinese government officials about this organ harvesting?

Katrina Bramstedt: Apparently not. They seem to have a different code of ethics about human values, and human dignity, and human worth.

Andrew West: What organs are we talking about here,  because they are very lucrative?

Katrina Bramstedt: Yes, well to be quite frank, we’re talking about everything. There has even been reports that the brain being taken and used for research purposes. So, they didn’t stop at just organs for the purpose of transplant, but also organs used for research, education, displays and things like that.

Andrew West: As I said, it’s a lucrative business as well.

Andrew West: I mean, pretty everything in China today are about money. What sort of money are we talking about?

Katrina Bramstedt: Well, it’s hard to put a figure on these things but there was a point in time where you could do a Google search and actually get price tags for organs, and foreigners were known to go around the world to get their organ transplants, because they were cheaper generally than where they are residing at that time, and you can get them quicker. But heart transplants could be bought for lets say $100,000 US dollars; kidney transplants could be bought for about $40,000 US dollars.

Andrew West: So even if they sort of knock down bargain basement prices, to put it in it’s crudest form, simply because of the volume of people that China is executing, it makes a lucrative business.

Katrina Bramstedt: It’s a lucrative business on their end. It’s not so great. I call it “wallet surgery”. It’s not so great necessarily for the people receiving them, because we know through empirical studies that many of those organs are not good quality, and people return to their country of residence with infections that they didn’t plan on getting. Even things like HIV and tuberculosis.

Andrew West: Katrina, this is first and foremost an ethical issue. I mean, medical ethical issue, but also a religious issue, because most of those targeted for forced organ harvesting are from religious minorities, aren’t they?

Katrina Bramstedt: Yes, yes they are. People who choose to get their source of strength from a source that is not the Chinese government, and that is seen as a threat to the government, so they target those people.

Katrina Bramstedt: Yes. But it could be anything. It could be pure Christianity. The Chinese government doesn’t like any established religions, doesn’t matter what they are. Because they are seen as, again, people are getting their source of strength and guidance from those entities, those organizations, and they don’t want that.

Andrew West: How does the medical community around the world view China, on this question? Because various prestigious universities have given honorary doctorates and fellowships to Chinese surgeons who are allegedly involved in this organ harvesting, so I am wondering, what is their reputation in the medical community?

Katrina Bramstedt: Well, I have to say it’s a bit of a mixed bag. Certainly, in terms of medical journals, we try to be very strict on not publishing papers from China, unless they can absolutely prove to us, that the work that they are submitting to us, has not involved forced harvesting of organs. But you are right. There are some academic institutions around the world who have given honorary appointments to folks from China, and that is pretty appalling.

Andrew West: Yes, although some countries in the world have essentially taken the lead in trying to clamp down on this. What did Israel do when it discovered that health insurance companies were affectively paying for people to use harvested organs from political prisoners?

Katrina Bramstedt: Well yeah, they have actually changed their entire program within their country about organ donation. It’s a little complex to explain in a nutshell, but it actually gives incentives to people within their own country to be organ donors to their own citizens. And so it has essentially erased the need for people to travel elsewhere for a transplant, and certainly the whole issue of insurance reimbursement had been shut down and that no longer happens.

Andrew West: So is that one of the solutions to this scourge?

Katrina Bramstedt: I think that is a potential solution. Absolutely, yeah.

Andrew West: In the film in which you participate, Hard to Believe, there is one Chinese surgeon, who’s own story is very arresting. He’s a Uyghur from far Western China. What does he reveal?

Katrina Bramstedt: He reveals that he in fact did witness or participate in this practice of forced harvesting from people who aren’t actually donors, and felt very regretful about it, and very traumatized by the experience. He has been ostracized by his community within China, in terms of the medical community and the government; he can’t get work in his field as a trained surgeon and he’s a bus driver. It’s humiliating for him, and he has so much regret and sadness about what happened.

Andrew West: I think the really horrifying thing about what he revealed, is that he participated in the removal of organs on patients who weren’t dead, and who were not anesthetized.

Katrina Bramstedt: Yes, that’s true. And there has been other people who have documented that. A group in Canada has done some work on that. It’s frightening. So, essentially, what we are talking about here is prisoners being shot at firing ranges, but actually not shot dead, and not shot dead on purpose. They are just minimally wounded, so that they are in fact still alive, and still profusing their organs with oxygen and blood, and then the organs are removed. And then they die as a result of the organs being removed, and not as a result of actually being shot as a form of punishment.

Andrew West: I mean, what is the ethical position of the West, that is now so interconnected, and Australia is of course “Exhibit A”, economically with China? What is our ethical position knowing this is so widespread?

Katrina Bramstedt: Well that is a very interesting and political question, because…

Andrew West: Well we don’t shy away from that!

Katrina Bramstedt: Yes! I am in squirming in my chair here. Well, you know, there is such…

Katrina Bramstedt: Yes. Yes. Good. Thank you. It’s the dollar signs. You know, the green dollar bills, I’m coming from America here, saying that, talk, the dollar bills, currency, are what opens and make relationships between countries. And other things often take a back seat — Other things being human rights, other things being morality and ethics, and the right thing to do. The dollar often reign supreme. And I think we see that even in situations of medicine.

“Dr. Bramstedt is one of the world’s few formally trained transplant ethicists.  She received her Bachelors and Masters degrees from Loma Linda University (USA) and her PhD from Monash University Faculty of Medicine (Melbourne, Australia). Additionally, she spent over two years at UCLA as an Ethics Fellow. Recently, she served 6 years as Chair of the Ethics Committee for NATCO, The Organization for Transplant Professionals.  Currently, she is an Associate Professor at Bond University School of Medicine (Queensland, Australia), as well as an Associate Editor at the Journal of Bioethical Inquiry.” — transplantethics.com

On Oct. 28, Professor Katrina attended the screening of Hard To Believe at NSW Parliament in Sydney and gave a speech.