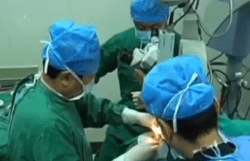 A Chinese Witness: 14 People Had Their Kidney Changed At Same Time

Recently, a Chinese netizen who had his kidney transplanted 13 years ago contacted NTD Television. He said that 14 kidney patients had their kidney changed at the same time with him in the hospital. A doctor told him that the kidney donor was very healthy. This patient suspected that the kidney was from live organ harvesting of a Falun Gong practitioner.

This patient didn’t give his name for security reasons, he told NTD about his experiences in Guangzhou.

A Chinese netizen: “I affected uremia in 2001, I noticed this problem in 2001.
Two months later I had my kidney changed. I was lucky I only waited for 30 minutes after I stood in a queue, they faxed out my blood type, half an hour later, they told me to stay in the hospital next day.”

Chinese netizen: “Because my girlfriend is a nurse. The military doctor told me that the donor was 28 years old and was healthy, the donor was from Guizhou Province.
He only told me the three issues, nothing else, They didn’t’ say what the donor does, let alone the name.”

This netizen reveals that there were other 13 uremia patients had operations on the same day.

Sources say that there was a complicated process before the transplants. Firstly was to find matched blood type, secondly was to find matched donor. However, how was this netizen so lucky, trhat it only took a half hour to find a matched kidney? Furthermore, there were 14 people had the kidney transplants on the same day. How could they be so lucky to have these donors?

In March 2010, Guangdong journalist of Southern Weekly published an article titled “Puzzle of Organs Donors”. The reporter interviewed He Xiaoshun, Deputy Director of the First Affiliated Hospital of Zhongshan Medical University. “2000 is the turning point for China’s organ transplantation. Liver transplantation increased
10 times more than in 1999. In 2005, it increased 3 times,” said He Xiaoshun.
However, China official statistics said that 2000 only increased one time more than in 1999.

Where do so many organs come from? The Chinese regime announced six times about donors’ sources but each time was different. It claimed that majority of the donors were executed prisoners. However, according to international human rights
organization’s investigation, about 2,000 executed prisoners were announced each year. Even if they are all donors, it is difficult to explain the large number of organ transplants taking place in China.

Some international medical experts analyze that in China, underground human organ stores likely exist. People have even been harvested of their organs while alive.

In July 2006, David Kilgour, former Canadian Secretary of State (Asia-Pacific), member of parliament, and David Matas, international human rights lawyer,
formed an independent investigation group, and published a report about allegations of live organ harvesting from Falun Gong practitioners in China. The report brings 12 aspects of the investigation together. It includes the causes, methods, proof, disproof, credibility, conclusion and suggestion etc. The final conclusion is that the allegations are true. The report says that “this is indeed ‘a form of evil yet to be seen on this planet.’”

On Dec. 8, 2011, Ethan Gutmann, a US investigative journalist, testified to the US Congress. He said that before the Beijing Olympics in 2008, there were about 65,000 Falun Gong practitioners being live harvested of their organs, with their hearts still beating.

On August 27, 2013, US-based Epoch Times group exclusively obtained an audio file.
The report said that on Sept. 13, 2006, Bo Xilai was then China’s Minister of Commerce, he visited Hamburg in Germany with then Premier Wen Jiabao, he admitted in the audio recording, it was Jiang Zemin issued an order to live harvest Falun Gong practitioners’ organs.

In April 1999, Jiang Zemin was the leader of the Chinese Communist Party, he clearly stated in a meeting of the politburo standing committee how to deal with Falun Gong.
He said “defaming their reputation, bankrupting them financially, destroy them physically.” Since then, under Jiang’s acquiescence and connivance, many Falun Gong practitioners and executed prisoners were organ harvested when they were still alive. The large source of live organs were Falun Gong practitioners who were illegally sent to labor camps. It is still happening today.