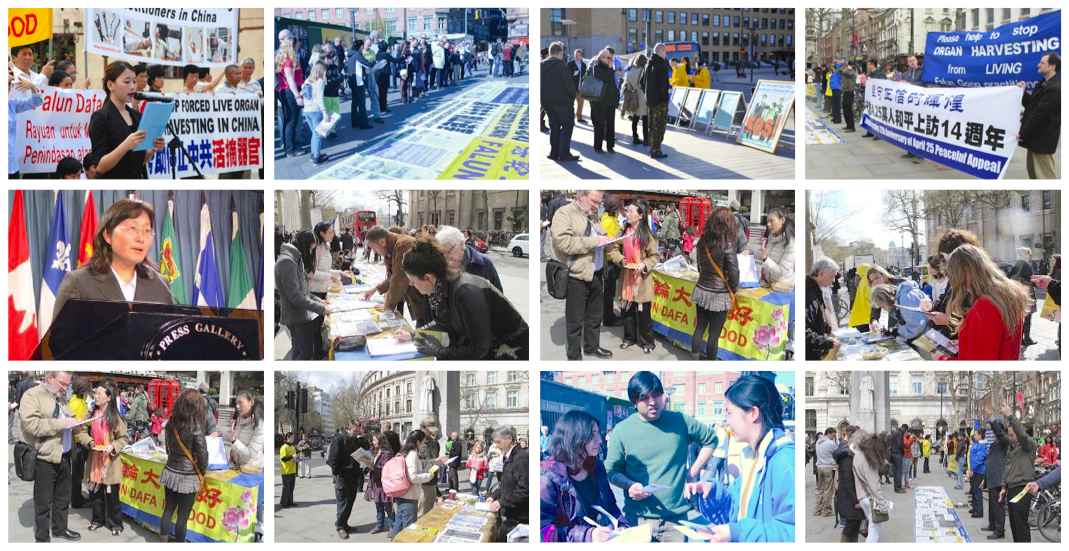 April 25, 1999 changed many people’s lives. On that day, more than ten thousand Falun Gong practitioners went to the State Council Appeals Office in Beijing, to peacefully uphold their right to freedom of belief. When the persecution of Falun Gong was fully unleashed not long afterwards, practitioners overseas also went to Chinese embassies or consulates to appeal in support of their fellow practitioners in China and to clarify the facts about Falun Gong. Fourteen years have since gone by, and practitioners often point to the April 25 event as a pivotal point in their lives.

Every year Falun Gong practitioners commemorate the anniversary of the April 25 appeal by demonstrating the Falun Gong exercises, exposing the persecution, and collecting signatures on a petition calling for the UN to investigate the CCP’s crimes of organ harvesting from living prisoners of conscience.

David Kilgour visited St Martin-in-the-Fields during his stay in London. He expressed his admiration for Falun Gong practitioners’ perseverance over the years to expose the persecution. He called for an immediate end to the persecution of Falun Gong and an immediate stop to the crime of forced organ harvesting that has been deemed a crime against humanity. Mr. Kilgour stated, “The CCP’s crime against humanity that I mentioned refers to the crime of killing Falun Gong practitioners and prisoners of conscience who did not do anything bad, but whose organs were illegally obtained for trafficking. This is a very, very terrible crime against humanity.” He states, ” The International Coalition to End Organ Pillaging in China will not rest until this inhuman commerce ends in China completely. Until the growing loss of face, often achieved through ‘naming and shaming’ the party-state, proves effective, other countries and their legislators have a responsibility to end complicity with this inhuman abuse by our own nationals.” 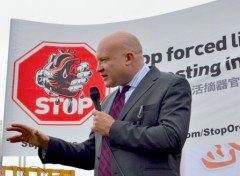 Mr. Ethan Gutmann, who has been committed to independent research into the Chinese regime’s organ harvesting crimes, said in an interview that Falun Gong practitioners’ original April 25 peaceful appeal was of great historical significance. He believed that it was this large-scale peaceful petition that made the international media focus on Falun Gong.

Mr. Gutmann stated, “On April 25, 1999, the international media reported on Falun Gong, although many of them, influenced by the CCP’s media, reported false facts. But this is not important. What matters is that all the reports brought Falun Gong into the sight of Western society, where everyone wished to understand what Falun Gong was. At the very beginning the Chinese regime tried to place the incident in the dark, not letting the world know about it. But Falun Gong refused to be placed in the darkness. What is essential about Falun Gong is that Falun Gong has always opened its doors to everyone. This is why Falun Gong today can stand in a bright place while the CCP is struggling on its last legs to suppress Falun Gong.”

➤ SIGN THE ONLINE PETITION TO STOP ORGAN PILLAGING IN CHINA