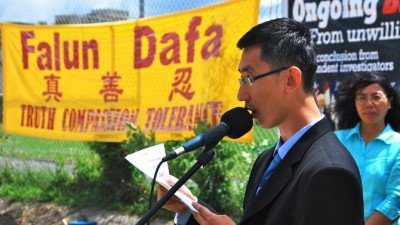 OTTAWA—Fifteen years ago on July 20, 1999, the Chinese Communist Party launched a genocidal campaign against some 70 to 100 million adherents of the Falun Gong spiritual faith in China—a campaign that continues unabated today.

To mark this tragic anniversary, practitioners of Falun Gong, also called Falun Dafa, and their supporters gathered in front of the Chinese embassy in Ottawa on July 17.

A similar event occurred on the same day in Montreal, and other gatherings will occur over the next few days across Canada and around the globe.

Appealing for a Father’s Release
Paul Li, a Canadian citizen and Toronto resident who is a practitioner of Falun Gong, spoke at the event to tell a personal story about his father’s firsthand experience of the benefits of practicing Falun Gong as well as the brutality and injustice of the persecution.

It was part of his efforts to seek help from the Canadian government to free his father, Li Xiaobo, who is currently being held in a detention centre in China.

Li told of how his father’s temper and overall health improved after he started to practice Falun Gong in 1996. Guided by the practice’s teachings of Truth, Compassion, and Tolerance, his father gave up smoking and other bad habits and endeavoured to put others’ interest above his own.

One of Li’s father’s colleagues once told him, “Your father is the most virtuous man I have ever met,” he said.

After the persecution began in 1999, amid a massive propaganda campaign to incite hatred against Falun Gong in mainland China, Li Xiaobo began to write articles to clarify the facts to the public.

He was arrested, and in a secret trial in 2005 that lasted less than half an hour, he was sentenced to eight years in prison. Due to the harsh conditions and severe torture he suffered in custody, by the time he was released in the spring of 2012, he had lost most of his teeth and was almost blind in one eye.

“The guards do not allow practitioners to cry out while being beaten, so they brutally hit the practitioners’ throat, stomach, or belly,” Li said.

“Many times the walls were splattered with blood, and the guards, in order to cover up their crimes, would force the Falun Gong practitioners to lick their own blood off the walls.”

Li said that in the winter his father was forced to stand naked with his bare feet immersed in cold water, and in the summer he was forced to stand still in a dark and damp space full of bugs, flies, and mosquitoes. “If he scratched a mosquito bite, he would be beaten,” he said.

In April this year, Li Xiaobo was rearrested, and his son fears for his safety.

“My father is still being held at a local detention centre and his health is declining,” Li said.

He noted that the local authorities are planning to put his father on trial soon, but that there is no possibility of a fair hearing.

“If the trial goes forward, I am very concerned that my father will almost certainly face a long prison sentence.” 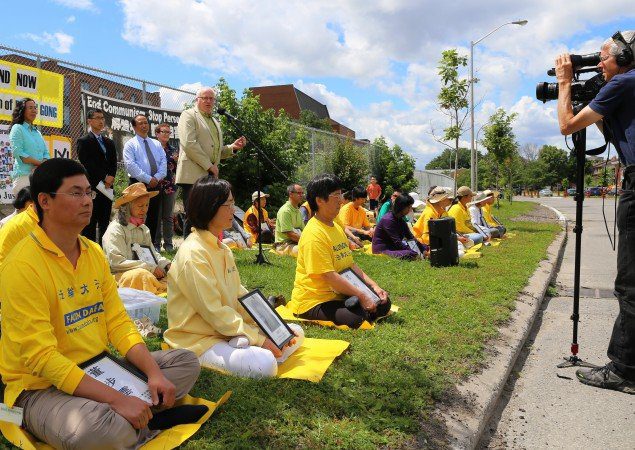 Crime Against Humanity
“Today, we gather in front of the Chinese embassy to protest and condemn the senseless brutality against Falun Gong practitioners by the communist regime, which remains a crime against humanity,” said Li Xun, president of the Falun Dafa Association of Canada, in his speech at the event.

“We are here to commemorate all of the brave and selfless practitioners who have died from the persecution while standing peacefully to protect the universal principles of Truth-Compassion-Tolerance.”

Alex Neve, Secretary General of Amnesty International Canada, who also spoke at the gathering, noted that the occasion was indeed a sombre one.

“We’ve gathered because this is a sorrowful and sombre time, because this has now become 15 years of unrelenting human rights violations experienced by countless Falun Gong practitioners throughout China.”

On the day Party leader Jiang Zemin began his campaign to eradicate the spiritual practice 15 years ago, huge numbers of Falun Gong practitioners were rounded up across the country and held in detention centres.

In the intervening 15 years, hundreds of thousands of practitioners have been imprisoned, tortured, brainwashed, and subjected to physical and mental torture. Families have been broken up, and millions have lost jobs, homes, and loved ones.

“Falun Gong practitioners are the single largest group of prisoners of conscience in China, and perhaps the world,” according to the U.S.-based Falun Dafa Information Center. 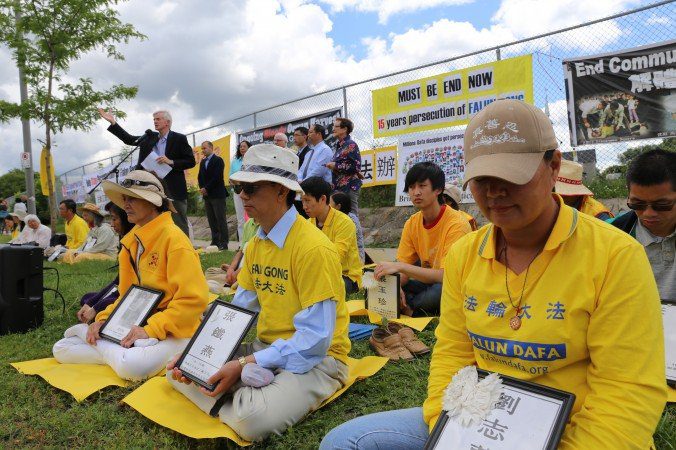 Illegal Organ Harvesting
To add insult to injury, Falun Gong prisoners of conscience have been used as a living donor bank to supply China’s lucrative transplant industry. In other words, they are killed for their organs and their bodies cremated to hide the evidence.

According to the book “State Organs: Transplant Abuse in China,” an estimated 65,000 Falun Gong prisoners of conscience have been killed for their organs in an illegal practice that is sanctioned by the regime.

“Forced organ procurement in China is unprecedented across the world because organs are sourced from prisoners whose lives are actively terminated to obtain their vital organs for commerce,” said David Kilgour, former MP and Secretary of State for Asia-Pacific, who also spoke at the event.

After researching allegations of forced harvesting of organs from Falun Gong practitioners in China, Kilgour and Winnipeg-based international human rights lawyer David Matas published their findings in the book “Bloody Harvest” in 2006.

Matas said at the time that the state-sanctioned killing of prisoners of conscience for their organs was “a new form of evil on the planet.” 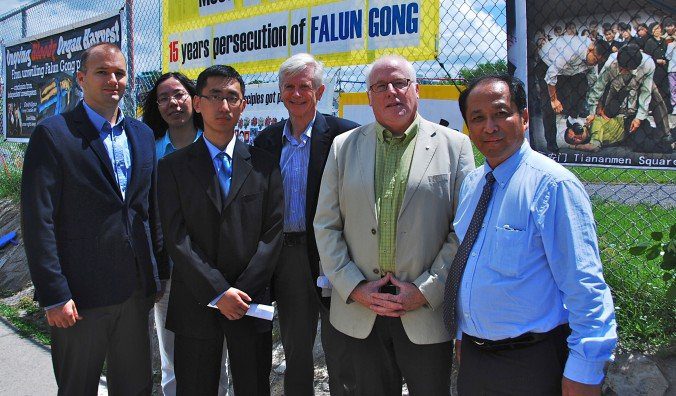 Peaceful Resistance
But despite the climate of fear in China, Falun Gong’s resistance has been notable.

In 1999 the group was not expected to last more than a few months with the full weight of the state and Party apparatus bearing down on it. Yet 15 years on, Falun Gong survives in mainland China, and its practitioners have mustered a sustained and peaceful resistance, said Li Xun.

Outside China, practitioners in the 114 countries around the world where Falun Gong is practiced have been working tirelessly to raise awareness about the persecution in the hopes of bringing it to an end.

“July 20 marks the 15th anniversary of the illegal persecution of Falun Gong in China and also marks 15 years of anti-persecution perseverance by practitioners and supporters around the world,” Li Xun said.

“Millions of people around the world have signed petitions to demand an end to these crimes.”

Li Xun also appealed to the Canadian government to urge the regime to end the persecution and release the Falun Gong prisoners of conscience, six of whom have family members living in Canada.

“At this critical historical time, we urge all of the world’s people to continue upright actions on human rights,” he said. 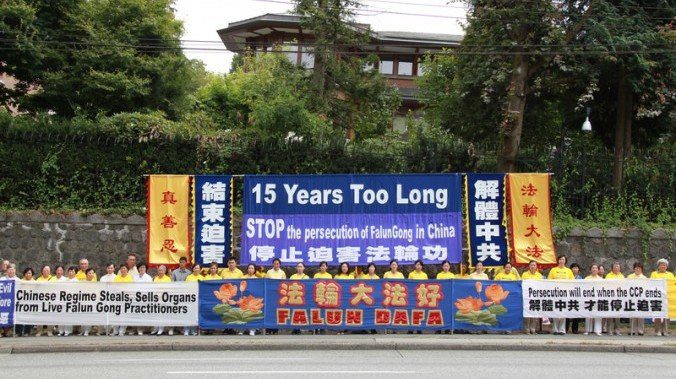